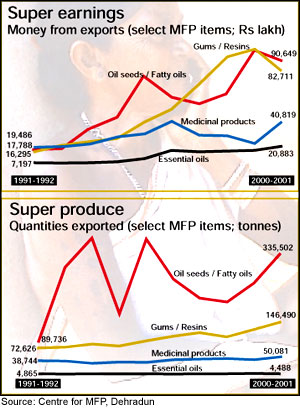  Studies in Orissa, Madhya Pradesh, Himachal Pradesh and Bihar indicate that over 80 per cent of forest dwellers depend entirely on MFP; 17 per cent of landless people depend on the daily wage labour of collecting MFP; and 39 per cent of people are involved in MFP collection as a subsidiary occupation

 Over 50 per cent of the revenues earned by the forest department comes from MFP. Growth of revenues from MFP have generally been 40 per cent higher than timber

 The share of total export earnings from MFP ranges from 56.5 per cent to 75 per cent of the total exports of forest produce including timber

The MFP market is a mystery