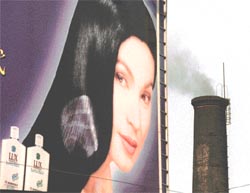 Remember the cartoon of the European explorer in North America, waving an axe to clear forests while moving towards the west coast a few centuries ago? The slogan "exploring the west' in China has a similar ring in the ear. China now has its eyes fixed upon its wild, barren and mysterious west. The changes in these parts are likely to be dramatic in the coming two decades. The aim is to bring west the economic miracle that transformed its eastern coastal areas in the past 20 years.

It is difficult to avoid superlatives while talking about China. Be it the 1.3-billion-strong population, the country's stunning economic growth after the reforms of the late 1970s, or the enormity of environmental pollution. It is d