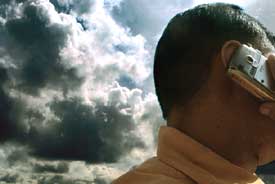 it may sound incredible, but the mobile phone network may soon be used to measure rainfall.

The strength of signals in a cellular network varies with humidity, claims a study by scientists from the University of Tel Aviv in Israel. Thus, existing wireless communication systems can also be used as a widely distributed, high-resolution atmospheric observation network, operating in real time, says the study, which was published in Science (Vol 312, No 5774, May 5, 2006).

Encouraging results have also been reported by similar studies funded by the Natural Environment Research Council of England and eu projects in Germany and Italy.

Mobile phone networks are equipped with a system to monitor and record the signal strength. When the signal becomes weak due to inclement weather, the system automatically boosts the signal to make sure that people can still use their mobile phones.

The Tel Aviv team analysed the data on signal strength from cellular networks and compared it with that of rainfall measurement through traditional monitoring methods, such as radars and rain gauges. The scientists found the results matched quite well.

They say that since the cellular networks are already recording signal strength, this approach of measuring rainfall will involve minimum supervision and no extra cost. Only the variations in the signal strength need to be interpreted. The approach can have significant application in flood prediction, too, the scientists say.

In a separate study, scientists at the Institute of Engineering Survey and Space Geodesy of the University of Nottingham in the uk have also shown that the fluctuations in cellular network signals are a good measure of atmospheric humidity.

But does this approach make a distinction between humidity and rainfall? "It is possible for service providers to record signal fluctuations and it is very easy to interpret them. But fluctuations also occur due to moisture and it is very difficult to distinguish between the two,' says Ashok Jhunjhunwala of the Indian Institute of Technology (iit), Chennai. Agrees National Climate Centre director Madhavan Nair Rajeevan, "We have read about the studies and had discussions with telecommunications scientists of iit Chennai and the Indian Institute of Science (in Bangalore) some time back as well. The idea is very good but we do not yet know how accurate it will be.'

Cellular technology in India, however, is not suitable for studying rain. "Rainfall intensity is measurable for frequencies above 5-6 Giga Hertz (GHz), maybe 4 GHz in India due to larger tropical raindrops. Long-haul microwave links in India have been set up at 2 GHz precisely for this reason (to avoid disturbance),' says Bhaskar Ramamurthi of iit Chennai.