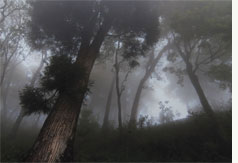 WHILE we are yet to ascertain whether aerosols are warming or cooling our planet, a scientific team has traced a new source: deciduous trees. These are plants that shed their leaves seasonally. So far aerosols were described as particles of pollutants like sulphur dioxide, black carbon (soot) and sea salt that remain suspended in the air.

Deciduous plants release around 500 teragrammes (1 teragramme equals 1012 grammes) of carbon each year in the form of an organic compound called isoprene (hydrocarbon). The chemistry of what happens to the compound as it forms aerosol particles has, so far, been unclear.

The team from CalTech in the US, University of Otago in the New Zealand and University of Copenhagen, in Denmark, found isoprene is repeatedly oxidized in the atmosphere to form an epoxide, hitherto unknown, called dihydroxyepoxide.

Epoxides are generally synthesized in the chemicals industry. It is rare to find such huge quantities of an epoxide, produced naturally by plants.