State of pesticide regulations in India 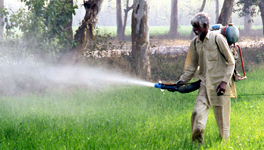 Of the 234 pesticides registered by the Central Insecticides Board and Registered Committee 59 do not have set MRLs, shows this CSE study on the state of pesticide regulations in India from a food safety perspective in the light of recommendations made by the Joint Parliamentary Committee.

The Joint Parliamentary Committees (JPC) formed on Pesticide Residues in and Safety Standards for Soft Drinks, Fruit Juices and Other Beverages, in 2003, was the and fourth only committee to have been set up on public health issue. The JPC was set up after Centre for Science and Environment (CSE) released its study on pesticide residues in soft drinks. The committee was to review the veracity of the CSE study and to suggest the criteria for evolving standards on soft drinks, fruit juices and other beverages. CSE was vindicated and in the course of evolving standards on pesticide residues in soft drinks, fruit juices and beverages, the committee found loopholes in the pesticides regulations as well as their implementation. In 2005, the JPC set out a clear agenda for governments to ensure the safe use of pesticides. The committee recommended to make mandatory the setting of maximum residue limits (MRL) for pesticides before registering it, setting MRLs for deemed registered pesticides, reviewing the set MRLs for compliance with the Acceptable Daily Intake (ADI) of pesticides and monitoring pesticide residues regularly. The paper reviews the state of pesticide regulations in India from a food safety perspective in the light of the recommendations made by the JPC.

Feature: No pesticide check yet.

Report: Household consumption of various goods and services in India.