Nearly half of Bangladesh's 130 million population will get a reprieve following the recent successful research in the treatment of arsenic contaminated water. Called the Direct Coprecipitation

According to the sources in the Public Health and Engineering Department (PHED), Bangladesh, arsenic, a chemical which causes black foot disease, has been found in 44 of the 64 districts.

Arsenic in groundwater in seven districts of West Bengal, India

Arsenic has been found in groundwater in seven districts of West Bengal covering an area 37,493 km having about 34 million population. Our survey indicates that 560 villages are arsenic-affected and more than a million people are drinking arsenic contaminated water and more than 200,000 people are suffering from arsenic-related diseases. 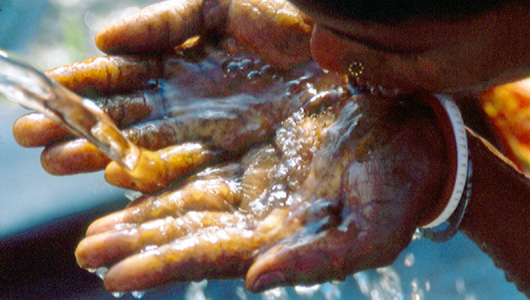 In the early 1970s, most people living in the countryside relied on surface water -- ponds, or rivers -- to meet their drinking water needs. As a result diseases due to bacteria-contaminated water, such as diarrhoea, dysentery and cholera were extremely widespread. To tackle this problem, and the related problem of drinking water, the government switched to a policy of tapping groundwater. The government began providing villages with tubewells and handpumps, with aid from such organisations as the United Nations Children's Fund (UNICEF) and the World Bank:UNICEF initiated the programme and paid for the first 900,000 tubewells along with its co-sponsor.

Threat in the woods

A study of commonly used pressure-treated lumber boards in the US suggests that the risk of arsenic exposure from these is higher than previously feared. Environmental Working Group, an environmental