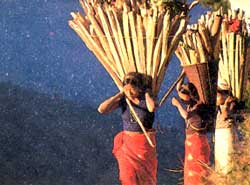 Energy problems have reached alarming proportions in the Tawang and Bomdilla areas.

Since the last five years, Choizm, of Khamba hamlet of Lohu basti in Tawang, has been hiring help at the rate of Rs 40 per day and paying Rs 1,000 for a truckload of firewood. She has also learnt to make her wood last longer. Earlier, about eight to ten sticks were burnt at a time in her fireplace. Now not more than five are used at a time.

Choizm recalls the days when collecting firewood was a short, even enjoyable trip to the forest. With age, the distance between the forest and the village also grew. Now the forest of her childhood has receded far beyond her reach and she finds her life totally changed.

Choizm is lucky. There are other people in the area who cannot afford to pay such high amounts to meet their energy requirements. They are compelled, therefore, to trek long distances to collect firewood, which takes an average of five hours every day.

The residents of Lohu basti are worried about the situation, but they have not accepted the situation. Two years ago, they formed an asokpa (organisation) under the leadership of Lhentup Lama, to check the indiscriminate felling of trees in their forests and to ensure that thefts did not take place. Even felling of trees for domestic use by local villagers is strictly regulated.

Yet, all these measures cannot prevent the commercialisation of firewood. Almost 90 per cent of the energy needs of the community is met by firewood. The hydel power produced is far from adequate to meet actual demands.