A farewell to farms 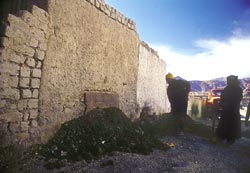 Padma Wangyal, 29, is quite an exception. His grandfather pioneered the cooperative societies movement in Ladakhi agriculture. In a region where the average landholding is a mere 1.38 hectares, Wangyal's family owns about 20 hectares. Wangyal attended school and college in Delhi. Like most young Ladakhis, he dreamt of joining the army, but poor eyesight put paid to it. For the past three years, he has put all his energies into his fields near Kharu