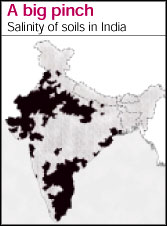 A third factor has led to the current debility of soils in India: irrigation. That is to say, water over-use. To feed the rice-wheat mentality, net irrigated area rose from 20.8 million ha in 1950 to 53.5 million ha in 1995-1996. Fed on irrigation, the agricultural area grew from a mere 20.8 per cent in 1966-1967 to 42.4 per cent of the 120 million ha of cultivated land in the country by 1997-1998. Canals began to weave their way through the land, bringing subsidised water right up to the farm-gate. Farmers went on a flood; then began to suffer.

Take the case of Ram Pal, of village Kalwala in Bhatinda district, south Punjab. He has a family of three to feed and aRs 50,000 debt. His only asset