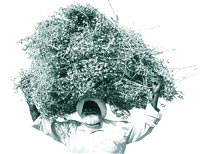 Agricultural growth in India has always laboured under the burden of producing more. The idea was: grow only foodgrains. That meant: not ecologically adapted cereals such as millets, but rice and wheat. The green revolution programme was single-minded: it came up with hyv (high-yielding variety) seeds for rice and wheat only. Dwarf wheats and rice were introduced, and the country was well on its way to prosperity.

Truly, it was. India became self-sufficient in foodgrains by the mid-1970s. But two other things happened. There began to emerge a regional imbalance in agricultural production. This can be gauged from another set of figures, that of irrigation. By 1996-1997, the state of Punjab had 92.9 per cent of its area under irrigation, followed by Haryana (76.2 per cent) and Uttar Pradesh (68.7 per cent). On the other hand, only 14.4 per cent of Maharashtra was irrigated, and 21.9 per cent of Karnataka. Secondly, and more importantly, the country's cropping patterns were completely transformed.