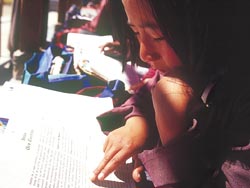 In Ladakhi, lango khel means conquering the highest point of a pass in the mountains. In Ladakhi schools, it means the matriculation (class X) examination. From 1947 to 1998, matriculation results in Leh district hovered between 0-5 per cent. The reasons are not difficult to fathom. Children grew up speaking Ladakhi at home but learned their lessons in Urdu, the official language of the state of J&K. After middle school, the language of instruction changed to English. There was great shortage of teachers, corporal punishment was common and teacher absenteeism had as much to do with lack of training and incompetence as with non-Ladakhi teachers getting unwillingly posted to far-flung, intolerably cold corners. Textbooks used terminology and symbols such as fan, train, ship, sugarcane and coconut, which are as strange in Ladakh as snow in Chennai. "There was no recognition in the education system that though Ladakh is a part of India, it is Central Asia for all practical purposes,' says Rigzin Spalbar, LAHDC's executive councillor in charge of education, who is at the centre of an education reform process.

Things started changing in the 1990s. In 2003, the matriculation result went up to 49 per cent (see table: Scaling the peak), with a government school in remote Turtuk recording a 100 per cent result. This quite unbelievable change was achieved with some remarkable synergy among social groups and politicians.

The root of the reforms lies in the work of a social group, the Students' Educational and Cultural Movement of Ladakh (SECMOL) headed by Sonam Wangchuk, an engineer by training and educationist by choice. While reading the National Policy on Education of 1968, Sonam had learnt of village education committees (VEC). These committees had parents working closely with teachers to ensure the smooth functioning of a school and maintenance of its essential infrastructure. SECMOL took up a government school in Saspol village in the early 1990s, formed a VEC and trained its teachers in widely acknowledged tools to make education interactive and interesting. It changed the medium of instruction to English by consensus. The results came in three years