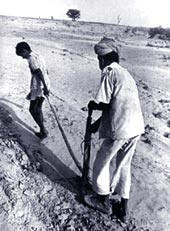 Soils are a very slow renewable resource. To reclaim them requires, above all, a long-term plan. With falling productivity, the realisation has sunk in that soils cannot be blindly mined, and that humans cannot just plough through the ecology they interact with.

apply gypsum: Seven lakh ha of land in Punjab and Haryana have been reclaimed using techniques such as applying gypsum or lime to salt-affected soils, or cultivating salt-tolerant crops along with nutrient and water management. But these technologies are expensive. And it takes a long time to make the soil fertile. Besides, salinisation is not always reversible, even with major investments in drainage facilities.

manage nutrients: Scientists believe integrated nutrient management (farmyard organic manure used in combination with chemical fertilisers) is the best way to tackle micronutrient deficiency in soils (see diagram: Go with the flow). Experiments conducted by icar proved that use of npk fertilisers (in recommended quantities) combined with 10 to 15 tonnes of farmyard manure per ha could as much as triple yields obtained from nitrogenous fertilisers alone. The potential for rural compost alone is 600 million tonnes. Urban compost adds up to another 15 million tonnes and green manure about 30 million tonnes. Less than 50 per cent of this potential has been harnessed so far.

microbes and earthworms: There is a teeming, if invisible, army of microbes in the soil and subsoil that support plant growth and recycle nutrients; an estimated 100 million bacteria, and 10,000 different species, in every gram of arable soil. The top 15 centimetres may contain as much as 4,000 kg of live microorganisms. These process organic manure twice their weight, making nutrients available to plants in readily usable form. However, their contribution has not received the kind of attention it ought to have.

There are also other organisms that help improve soil quality. Earthworms, for instance, function as