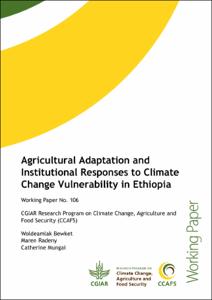 Climate change is a major development challenge to Ethiopia. Climate change is expected to adversely affect all economic sectors, eco-regions, and social groups. Agriculture is one of the most vulnerable sectors as it is highly dependent on rainfall. This report synthesises four case studies focusing on the impacts, vulnerabilities and local adaptation practices in Ethiopia‘s agricultural sector, including policy and institutional responses. The case studies were carried out in nine districts, representing the major agro-ecological and farming systems. The case studies use qualitative data generated through rapid appraisal methods, complimented with a review of relevant literature. The results show that there are changes in local climatic conditions, manifested through several indicators. These include increased temperatures, changes in rainfall amounts and patterns, and increased incidence of drought and flood events. Drought was a major problem in almost all sites, while floods affected localized areas in some of the sites. Informants attributed climate change to poor management of natural resources (forests and grazing lands), with rapid population growth as a key driver.