Cities and the new climate economy: the transformative role of global urban growth 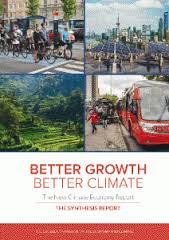 Urbanisation is one of the most important drivers of productivity and growth in the global economy. Between 2014 and 2050, the urban population is projected to increase by around 2.5 billion people, reaching 66% of the global population. By 2030, China’s cities alone will be home to nearly 1 billion people. India, Nigeria and Indonesia will also experience rapid population growth. If managed well, the potential benefits of this urban growth are substantial. The economic potential is driven by raised productivity resulting from the concentration of people and economic activities in cities that leads to a vibrant market and fertile environment for innovation in ideas, technologies and processes. Similarly, well-managed cities in high income countries could continue to concentrate national economic growth, through re-densification and the roll out of innovative infrastructure and technologies. In this paper, commissioned by the Global Commission on the Economy and Climate as part of the New Climate Economy project, examine potential impacts of urbanisation on the economy and climate and the choices that governments face for managing urban growth. In particular, It address a key question facing policy makers at national, regional and local levels: can urban growth in cities over the next two to three decades be managed in a way that improves the economic performance of countries and cities and the quality of life of those who live in them – and at the same time reduce its contribution to climate change?