Stopping payments to polluters: clearing the air with fossil fuel subsidy reform in China and India 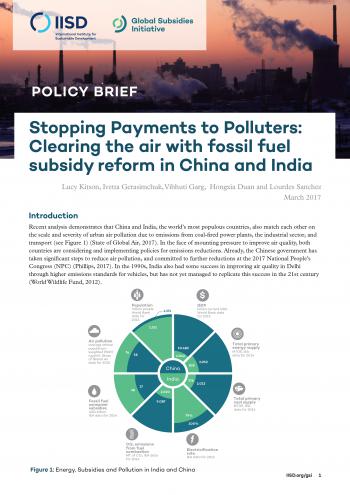 China and India, the world’s most populous countries, also match each other on the scale and severity of urban air pollution. Addressing this pollution requires that governments reorient policies away from fossil fuel combustion. This brief explores one such policy shift—reform of fossil fuel subsidies—and how this shift is being implemented in China and India. Subsidies to the production and consumption of fossil fuels reduce their price, encouraging their continued use and thus ongoing air pollution: in contrast, reform of these subsidies can be an important tool in discouraging use and thus reducing emissions. Further, reforms can also generate significant public benefits in terms of reduced and more efficient government spending. However, experience of reform clearly demonstrates that the issue is often politically and economically charged, and that strategies for the reform need to be carefully developed and implemented.