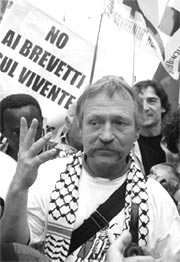 the World Food Summit, convened by the Food and Agriculture Organisation (fao) and held in Rome from June 10-13, failed to secure an enhanced commitment to its goal of reducing the number of hungry people from 800 million to 400 million by 2015. What it could just do was to refresh the call of this target set during an earlier meeting held six years ago. The summit exposed the indifference of the western world to global hunger, with most of its top leaders playing truant.

Most western nations sent only their agriculture ministers. Worse still, the uk despatched a junior official to observe the proceedings. In fact, British international development secretary Clare Short was reported as saying that a minister wasn't sent because she did not expect it to be an effective summit. Going a step further, she called fao "an old-fashioned un organisation'.

The poor countries opined that the huge agro-subsidies doled out by some of the richest nations kept small-scale farmers in the developing world mired in poverty and denied them market access. Australia backed the developing countries, asserting that massive assistance to agriculture in developed nations undermines development and poverty reduction objectives in the former. Most delegates slammed the us farm bill signed by President George W Bush, terming it as a move away from trade liberalisation.

The us, meanwhile, contended that genetically modified food could help fight hunger by increasing productivity. fao director general Jacques Diouf differed: "The position of fao is that in the short term, biotechnology is not the priority to achieve goals for 2015. Water is the top priority. Only one per cent of West African land has control of water resources, and only four per cent land in sub-Saharan Africa does.'

Several ground realities were, however, hardly discussed at the summit. To banish malnutrition, an additional annual investment of us $24 billion is needed in the poor countries. But this assistance is not forthcoming from the developed nations. On the contrary, concessional assistance for agriculture to poor nations provided by developed countries and international financing agencies has gone down by 50 per cent in the last decade. Without such sops, global hunger cannot be tackled. Also, in the South, money spent on agricultural research and development is very little as compared to the North. Washington-based International Food Policy Research Institute (ifpri) reveals that public institutions in developed countries spend about four times more than developing nations on research as a proportion to their agricultural output. If research spending by private companies is added, this disparity doubles.

At the end of it, environmentalists and farmers dismissed the food summit as a wasted opportunity. While ridiculing its final declaration, they said that the outcome of the meet favoured the interests of the us biotech corporations and not the world's hungry.