Report on the state of food insecurity in urban India 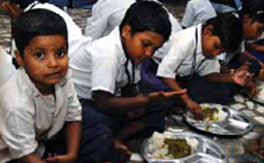 This new report on the state of food insecurity in urban India by MSSRF shows that the period of economic reforms and high GDP growth has not seen an unambiguous improvement in urban food security across all States.

In recent years, the pace of urbanisation has been increasing. In deliberations on food and nutrition security, the situation in urban areas is often overlooked. About half the women in urban areas are estimated to be anaemic and undernutrition among women, indicated by chronic energy deficiency, is increasing. As pointed out in this report, the access and absorption indicators of urban food insecurity, in spite of the rapid economic growth during the 1990s, reveal an alarming picture. Smaller towns are significantly worse off than large cities and metropolitan areas when it comes to key food security indicators. This urban report also shows that there is considerable variability within the country relating to the levels of food security. For example, Tamil Nadu, which not only has a universal PDS but is also supplying up to 20 kg of rice per month at the rate of Re.1/- per kg to 185 lakh families, is in a much better situation than most other States in India. This reveals that, where there is the necessary political will and action, hunger can be eliminated earlier than normally considered possible. This updated report on urban food insecurity is an important tool for policy makers and other stakeholders who are working towards achieving the UN Millennium Development Goals by 2015.