The new biomassters: synthetic biology and the next assault on biodiversity and livelihoods 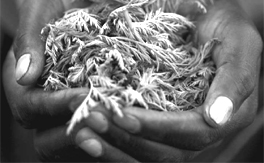 This new report by ETC group is a critique of what OECD countries are calling 'the new bioeconomy'. Analyzes impact of next generation biofuels, burning of biomass for electricity and also sets the new REDD+ provisions in this context.

As global attention switches from the new Nagoya Protocol of the Biodiversity Convention to the next climate talks in Cancun, Mexico, ETC Group releases a groundbreaking report that lifts the lid on the emerging global grab on plants, lands, ecosystems, and traditional cultures. The New Biomassters - Synthetic Biology and the Next Assault on Biodiversity and Livelihoods is a critique of what OECD countries are calling 'the new bioeconomy.' Concerted attempts are already underway to shift industrial production feedstocks from fossil fuels to the 230 billion tones of 'biomass' (living stuff) that the Earth produces every year -not just for liquid fuels but also for production of power, chemicals, plastics and more.