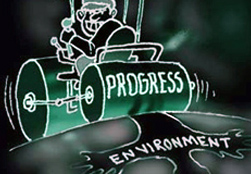 Environment ministry clears projects, even those rejected earlier, at an unprecedented rate and as per this analysis by Centre for Science and Environment (CSE), the rate of granting clearances has increased by 42 per cent compared to last year.

Latest News from Down To Earth

After a lull for nearly a year, Nirma's cement plant in Gujarat's Bhavnagar district, is back in the spotlight. The National Green Tribunal has decided to re-evaluate the project by sending expert members for site inspection. On February 8, the tribunal bench headed by Justice Swatanter Kumar, observed there is little doubt that the project will adversely affect the environment.

Ash flies in the face of power plan

ODISHA is set to become a powerhouse of the country. Over the past seven years, the state has signed several memorandums of understanding (MoUs) with public and private firms to produce 50,000 MW thermal power. The state is proud of this achievement, but experts are concerned over an environmental threat—fly ash, the notorious waste product of coal-fired plants, known to ruin agricultural land.
Odisha may witness production of about 100 million tonnes fly ash annually if all the thermal power projects become operational.

Read text of the new industrial policy for Maharashtra cleared by the state cabinet. It focuses on less developed region of the state to bring them on par with mainstream industrial development.

A public hearing for granting environment clearance to the upcoming 4 X 700 MW Haryana Atomic Power Project will be held at Gorakhpur in Haryana on July 17, 2012. Read and share this EIA report of the project.

Environmental Public Hearings are a mockery of the law in Jharkhand: the case of public hearing at UCIL-Jaduguda

Judgement passed on 19.07.2011 by the Hon'ble High Court of Orissa regarding expansion of Alumina plant and Captive Power Plant at Lanjigarh in Orissa

Record of proceedings of the Supreme Court of India on the Petition for Special Leave to Appeal (Civil) No. 14698/2010 on the proposed Nirma Cement Plant at Bhavnagar, Gujarat

Record of proceedings of the Supreme Court of India on the Petition for Special Leave to Appeal (Civil) No. 14698/2010 on the proposed Nirma Cement Plant at Bhavnagar, Gujarat dated 18/03/2011.

Supreme Court judgement dated 06/10/2009 on river Noyyal pollution. The Court was of the opinion that there has been unabated pollution by the members of Tirupur Dyeing Factory Owners. They cannot escape the responsibility to meet out the expenses of reversing the ecology. They are bound to meet the expenses of removing the sludge of the river.

About one third (31) of the top 100 companies in India report on corporate responsibility (CR) performance and 52 percent of these reporters provide reference to their sustainability strategy, KPMG has found in a survey. The survey included the top 100 listed companies in India by revenue. KPMG examined information disclosed publicly by these companies to discern emerging trends in corporate responsibility reporting.

A report of the Comptroller and Auditor General of India (CAG) on the performance audit of the activities of Corporate Social Responsibility by Coal India Ltd (CIL) during April 2004 to March 2010 in areas like environmental protection, safety requirement, occupational health of the workers and community development shows low allocation of funds and even failure to utilise those meagre funds.

Best methodologies being followed in waste treatment system in BGPPL, Kamalapuram to emerge as an eco-friendly mill

This book is an attempt to document all the complexities of mining. While, it is true that mining is essential, it is not a simple 'dig and sell' proposition for a country like India. Its challenges are immense.

Challenge of the new balance

Ramesh Gauns, Goa, speaks on mining and mineral based industries at the Anil Agarwal Dialogues on green clearances organised by CSE at New Delhi on the 24th and 25th of February, 2012

The green guide for kids

This website is an online environmental resource for kids to find ideas, information, and inspiration to go green

Kidsgreen, a children’s website developed by the Centre for Environment Education, India (CEE).

GoGreen Man wants to save the earth from Dr. Pollution, will you help him?